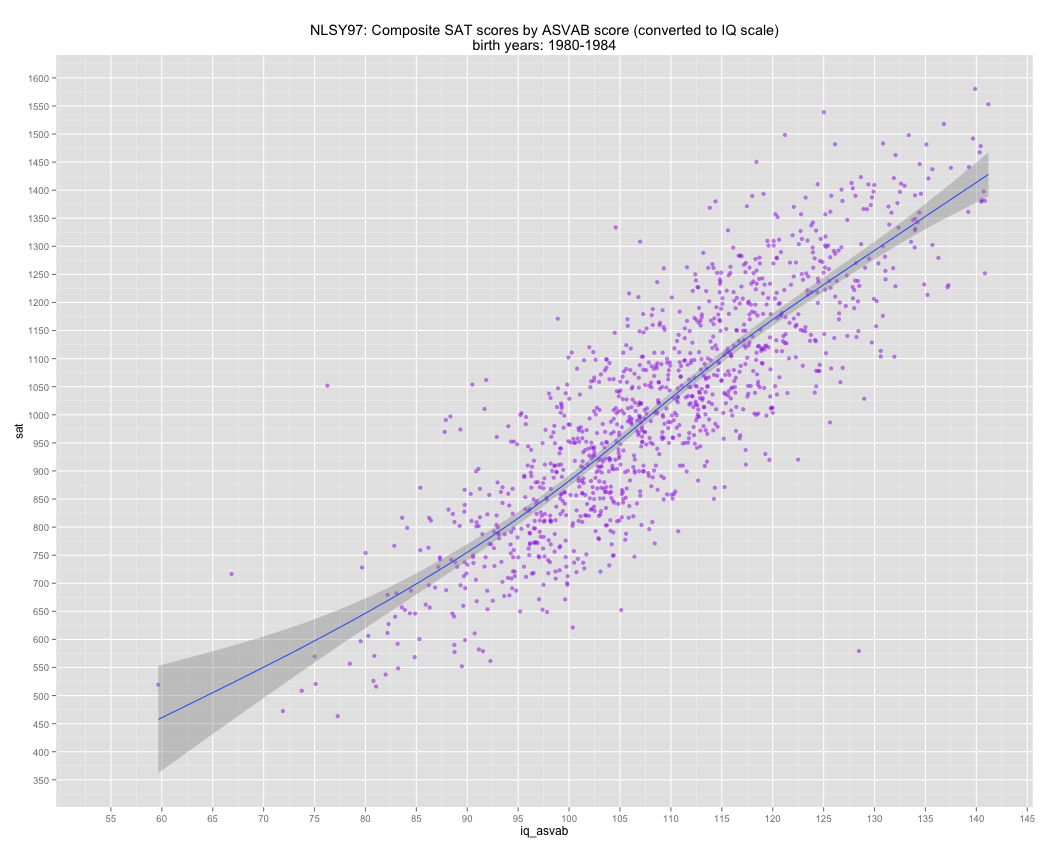 Although I touched on this topic briefly before, I seem to have forgotten some relevant plots and data and don’t feel like editing the last one, so this post is somewhat redundant…

Both the SAT and ACT are quite well correlated with IQ tests, so much so that you can make good guesses about someone’s IQ if you know their SAT/ACT score and vice versa.

The SAT – ASVAB correlation is quite strong and it is probably weakened by range restriction effects.  People with lower IQ scores and/or lower HS GPA are much less likely to sit for the SAT.   If the SAT is significantly influenced by the degree to which people actually apply themselves in school (almost surely to some degree) and IQ is only weakly correlated with conscientiousness and related characteristics, both will tend to significantly reduce the apparent strength of the correlation

The ASVAB/AFQT is effectively an IQ test and it is certainly well correlated with “official” IQ tests like Wechsler Adult Intelligence Scale (WAIS) and Stanford-Binet.

Given the strength of the correlation between ASVAB and SAT/ACT and similarities in design, the correlations between these “aptitude” tests and WAIS or Stanford-Binet are probably very similar, especially without range restriction effects and without these tests being spaced apart by several years in some cases (consider that the ASVAB-SAT r=0.85 whereas PSAT-SAT r=0.90…. pretty close).  Of course, there is not one true “IQ test” and different tests have different strengths and weaknesses.

Other people have studied this question using NLSY79 (the older NLSY study) and compared to other psychometric tests too.

Of course, just because these tests are well correlated in general does not mean that one cannot make incrementally better predictions with additional information or, at least, adjust the confidence level accordingly.  It seems to me that people that “slack off” in school, as determined to lousy GPAs despite high IQ, are significantly less likely to earn SAT scores commensurate with their intelligence (especially at the upper ability levels).

That’s not to say that that makes the SAT a worse predictor for admissions purposes though!

Likewise, there are some modest differences by the student’s father’s education level:

(which doesn’t necessarily means these tests are biased as there are also average differences in GPA controlling for IQ, not to mention regression to the mean, etc)