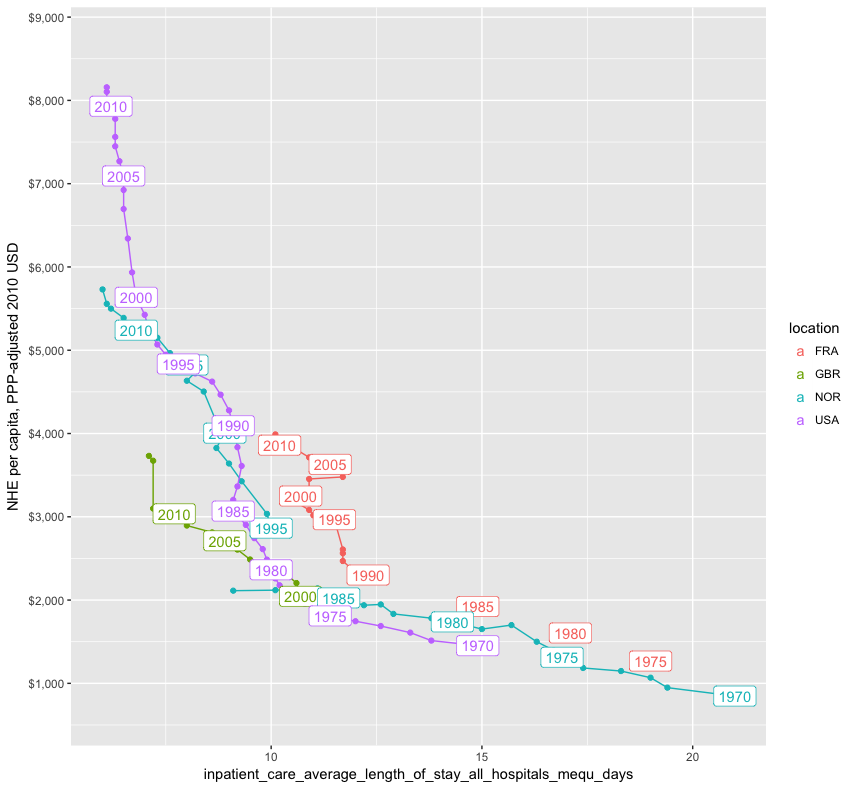 This Commonwealth Fund report has been widely cited for explaining why US health expenditures are so high.

The analysis finds that the U.S. spends more than all other countries on health care, but this higher spending cannot be attributed to higher income, an aging population,
or greater supply or utilization of hospitals and doctors. Instead, it is more likely that higher spending is largely due to higher prices and perhaps more readily
accessible technology and greater obesity.

Since I have already spoken to the incomes argument at some length and explained why I find overall “high prices” to be unpersuasive as it pertains to NHE in general and the US specifically, I will instead focus narrowly on this utilization argument since there are a number of similar analyses with identical/similar indicators.

The report proffers this table as an explanation for why high utilization cannot explain high US health expenditures.

My problem with these sorts of analyses is that these sorts of indicators do not themselves account for enough NHE directly or correlate with NHE well enough to claim to account meaningfully for utilization and other major non-price drivers of NHE (if you wish to remove quantities of technology, prescription medicines, etc from “utilization” for semantic reasons).  When (1) your utilization measures can only account for maybe 10-15% of the variance (2) only relates to a modest proportion of NHE in most developed countries and (3) one ought to know there are other major cost drivers to account for, it’s pretty silly to claim that your half-hearted attempt to explain the variance honestly means it cannot be utilization and that it must be (mostly) the result of some US specific prices.

Many of the highest spenders rank relatively low on these utilization metrics and many of the lowest spenders rank quite highly.  And it is not as if there is not substantial variation in NHE per capita between countries or that NHE hasn’t radically increased over time pretty much everywhere (especially those with growing economies)

Several of their indicators are even inversely associated with NHE over time and none of them can claim to ‘explain’ much of the increase in NHE.

Shorter stays are partially cost containment strategy (longer stays typically don’t have much in the way clinical benefits and reducing this saves some money other things equal).  Regardless this is clearly the direction the developed world has moved in and US is best described as being ahead of the curve here.

We can quickly compare the (mean) bivariate correlations between NHE per capita and these measures over time (by_country_mean), between countries (by_year_mean), and overall (by_var_only).

The strongest of the utilization indicators selected by the Commonwealth Fund (CF) in recent years is physician density, but it doesn’t explain a whole lot between countries (by_year_mean) or overall.

There are about 500 metrics in the OECD database [note: combining “utilization“, “pharmaceuticals“, and “health care resources“.  Extracting only the rates, percentages, etc instead of raw counts and related].   Although there are not enough of them to directly measure volume comprehensively (it still leaves vast swathes unmeasured) and tends to measure the same things in different settings/configurations, we can certainly see what best correlates with NHE within and between countries and how US compares on these measures.

I am sampling and color coding them by those with large positive correlations, neutral (near zero) and with significant negative correlations across both axes (time and country) to help illustrate this.

By and large what we find are that the per capita quantities of certain types of procedures (see: knee, hip, laparoscopic appendectomy), prescription medicines , nursing/staffing factors (per capita, hospital ratios, etc), radiological/diagnostics, etc explain much both within (over time) and between (cross section at moments in time) countries.  These are areas where the United States is usually consistently at or near the top (averaged over several items these add up to a large lead) and other countries are generally moving in very similar directions in this data (or otherwise generally known through background knowledge).  At the other end of the list we find waiting lists for procedures to be quite negatively correlated (which are very much a method of rationing volume), along with abortions, and other items.

Full list can be viewed here in Google Documents

Because there are some idiosyncrasies between systems, measurement error, not necessarily perfect overlap between axes, and so on and so forth, we should expect significant dispersion.  Nonetheless this tells us something.

Compare this with Great Britain:

Or Poland (a comparatively poor country)

Basically if we just know the slope (correlation coefficient) for each country as displayed on these plots we can reasonably estimate NHE per capita:

This slope should be a rough proxy for volume of NHE (it does not include any country-specific pricing information directly).  However, I didn’t take any account of missing data, which could potentially skew the relationships, and I’d like to try something slightly more sophisticated.   This time I’ll simply impute a handful of missing values in the aforementioned metrics-only (i.e., without consideration of expenditures like GDP, AIC, NHE, etc) and take a weighted average of the annually scaled values:

We can of course predict NHE per capita even more precisely with AIC per capita:

But it’s still a useful exercise to demonstrate that (1) even rough proxies for volume can explain most of the systematic variance between countries (i.e., rich/high spending countries actually do a lot more and a lot differently) and (2) the US is clearly much further along this continuum than the typical OECD country.  The same utilization and related non-price factors that explain NHE between other OECD countries also does much to explain the US.

Even if the price associated with these various differences were identical to those of more typical OECD countries we should well expect the US to be spending much more than Japan or Great Britain based on the implied volume.  Some of this stuff may have terrible ROI, but that does not mean that these differences do not produce much higher costs and it certainly does not look like the US is alone in this behavior (other countries are also adopting this technology, expensive knee/hip surgeries, etc etc).

It’s also interesting if you compare these common utilization measures against other predictors of NHE with the imputed data (to plug small holes here and there amongst the relatively more developed OECD economies):

By and large the sorts of metrics proffered by CF and others explain only a modest fraction of the variance between modern health systems and almost nothing once we know a just a small handful of other things about the country or health system (e.g., disposable income, technology utilization, elective surgeries rates, hospital staffing practices, etc).

We can also summarize and visualize this highly dimensional utilization/characteristics data with PCA:

The data are pretty noisy, but most of the variance is still explained in the first few dimensions.  The US generally clusters with N/W Europe, Canada, etc (not with the less developed countries of the OECD as some people might imagine….)

We can also use these first few components to predict NHE because these components happen to be individually associated with NHE:

And find that the sum effect suggests substantially above average US spending too.

The plot, of course, suggests the US is spending substantially more than expected, but this table shows that AIC (again) fully mediates them and knocks the US dummy down to dramatically.

This is consistent with omitted variables, imperfect measures, these components not being designed for this purpose, and, probably more importantly, the true income effect being much stronger than people generally give it credit (controlling for GDP in a linear specification does not yield the same results).

I find the higher volumes (quantities) suggested by my preferred estimates to be much more plausible than the what the CF and others would suggest based on my background knowledge, study of the literature, etc.  If anything these may be under-estimates.  A fairly recent study affiliated with the construction of health (and specifically hospital) PPPs suggests US price levels are significantly lower than expected and volumes substantially higher.  These are also consistent with the latest health PPP and volumes found in OECD.stats

It is also consistent with a variety of other literature showing that the vast majority of the increased NHE in the US over the past few decades (and recently) is attributable to non-price factors (more technology, increased procedures, etc), not to mention a large increase in the health care workforce over the past few decades, very modest increases in physician compensation (especially relative to average wage), and much more.

This does not necessarily mean that US health care should be perceived as “cheap”, but it does very much suggest that in careful apples-to-apples comparisons the US compares quite favorably for such a rich country.   Actual costs as experienced by patients (or as measured by health insurance premiums, NHE, etc) can still be “expensive” due to higher volume (e.g., more use of cutting edge technology, more/more complicated elective procedures, more/more expensive tests, etc).    The cumulative effect of these differences and that which is associated with it (as in, diagnostics-> interventions, more intensive treatment, etc) add up.

That said, even in these arguable areas of “waste”, it would seem the US is mostly just ahead of the curve as the rest of the world is tracking very similarly as a function of AIC, disposable income, etc in the long run.   The apparent difference mostly comes down to the fact that the US is and has long been much richer on average (it is not due to individual-income effects) and people see even less of the true cost of their health care in many other countries.

The individual measures in the OECD database generally correlate virtually identically with AIC as they do with NHE in several dimensions (across countries, across time, etc).  This should not be very surprising if you remember there are strong correlations between AIC and NHE, but it’s useful to the extent people want to argue these measures merely cause +/- NHE  independent of wealth.  It also helps confirm that the individual movements in these various volume indicators are roughly equally well associated with actual changes in broader economic aggregates (or at least they are to the degree they’re associated with NHE).

Note: It looks like at least several of the outliers in the left quadrant are associated with rationing efforts (wait lists).

This plot essentially shows that an increase in AIC per capita within countries over time is associated with substantial changes in these individual measures (e.g., hospital staffing, surgical procedures, etc) and to almost the same degree on average as these correspond to changes in HCE.